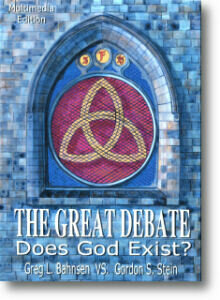 The Great Debate: Does God Exist?

ASST-MM
$17.00
Debate, extra materials
In stock
1
Product Details
UPC: Greg L. Bahnsen
Brand: CMF
December 11, 2006 marked the 11th anniversary of the death of Dr. Greg L. Bahnsen. February 11, 2007 will mark the 22nd anniversary of the "The Great Debate: Does God Exist?," a formal debate between Dr. Bahnsen and Dr. Gordon S. Stein, held at the University of California (Irvine) in 1985. As time passes, it is important that we continue to introduce people (especially young people) to Dr. Bahnsen's work in Christian Apologetics. This new multi-media edition of the Great Debate provides a wealth of introductory materials, useful for individuals and schools.

Limitations in the original recording equipment and master recordings left us with some diminished audio quality. However, through the kind services of Imagineering Studios, Inc., these recordings were digitally remastered from the original reel-to-reel recording and they were able to offer some helpful improvements. In addition, we have added 3-minute tracks to the recordings, which make stopping and starting the debate more convenient. The debate is offered on two standard CDs, playable on any CD player.

A Transcript of "The Great Debate"
This is a word-for-word written transcript of the debate.

Reflections:
"The Great Debate Twenty Years After": A collection of written remembrances by some who were present at the debate and some who have been impacted by it.

3 - Mp3 Lectures: "A Reason for the Hope: Basic Training in Apologetics"
Part of THE BASIC TRAINING SERIES, this is the best tape set for an introduction to apologetics-assumes no prior knowledge-taking believers to a deeper level of understanding in how to defend the faith.

GB1730 With Good Reason
GB1731 The Facts Don't Speak for Themselves
GB1732 Hasn't God Made Foolish the Wisdom of this World?

3 - Mp3 Lectures: "Another Cup of Coffee: An Introduction to the Apologetic of Cornelius Van Til"
This short series introduces the apologetic method of Dr. Cornelius Van Til to an audience not previously acquainted with his work. Dr. Bahnsen follows this introduction with a biblical exposition of Acts 17 and Paul's defense of the faith at the Areopagus.

4 - Mp3 Lectures: "What? Me Defend the Faith"
Yes, you not only can, you must defend the faith. Apologetics is for every believer and every believer can learn how to do the job well.

2 - Mps Lectures: "Application and Illustration of Method"
Discussion of the Bahnsen/Stein Debate.

Parts One and Two

1. "A Personal Testimony: My Lord and My Life"
2. "A World Without Religion"
3. "Another Cup of Coffee"
4. "At War With the Word"
5. "Beware of Philosophy"
6. "Evidentialist Apologetics"
7. "Presuppositional Procedure"
8. "Prolegomena to Apologetics"
9. "Radical Empiricism Made Foolish"
10. "Reasoning With TRUE Faiths"
11. "Van Til's Life and Impact"
12. "Where the Rubber Hits the Road"

1 DVD - "Apologetics for Young People"
This is 2-hour video of a lecture given to high school and college students, instructing them on how to defend the faith. [NOTE: the first few minutes of the video has a "tracking" problem but this clears up quickly.]