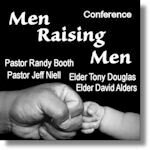 CSMM-CD
$15.00
CSMM -- 6 CDs
In stock
1
Product Details
Brand: CMF
This is a conference for all men; men with sons, men with daughters, single men, young men, and old men. As members of the body of Christ men are called to lead, encourage, instruct, discipline, prepare, protect and sacrifice. We need to think harder and bigger about our calling as men so that we might be better equipped to serve our families, churches and world.

Men must rise to the occasion of our cultural crisis to be men themselves before they can begin to train their sons to be men. The word of God must be embodied in the teacherhidden in his heartbefore he can diligently instruct those under his charge. The hearts of fathers turn first to their children, and only then will children’s hearts turn to their fathers.

In a feminized and irresponsible culture, many men are effeminate, wimpy or lazy. A clear image of biblical manhood must be set before us if we are to make any significant moves to recapture our culture for Christ. “So I sought for a man among them who would make a wall, and stand in the gap before Me on behalf of the land, that I should not destroy it; but I found no one” (Ezek. 22:30).

Every government—every covenant—has a head. Men serve God as rulers in every covenant relationship, functioning as superiors who are responsible for the constituent members of that particular covenant. It is God’s plan (under normal conditions), that husbands are the covenant-heads of households. As covenant-heads, husbands have a duty to honor and obey God toward all those who are under their charge. This honor and obedience is the demonstration of the husband’s love for God. Having received his instruction from the word of God, the godly husband then assumes full responsibility for his household, instructing and disciplining them in the way of the Lord.

It is essential that we know and contrast the many pleasures God holds for the righteous man vs. the indulgences of fools. Men must be trained to desire the things that will give them the full range of pleasures that God provides; e.g., from labor, sacrifice, wife, children, pleasing God, eternity, etc.

Reviews Biblical economic principals in light of economic realities today and the mandate for Christian men to be financially prepared for tomorrow.   Focusing on 1 Timothy 5:8 “But if anyone does not provide for his relatives and especially for members of his household, he has denied the faith and is worse than an unbeliever,” this talk will consider “Toiling, Tithing and Tending” as an outline for obedient and faithful provision.

Technology has enabled unprecedented, unlimited, unrestricted and anonymous access to entertainment, information and social interaction ...without accountability.  “Putting Away Childish Things” explores the impact of technology and social media on the Christian character of men in the home, at work and in the pursuit of “free” time through the lens of 1 Corinthians 13:11 “When I was a child, I spoke like a child, I thought like a child, I reasoned like a child. When I became a man, I gave up childish ways.”

“Well done” or “Ill done”?  We are the servants of the Lord and we are to be those who have intentionally grasped the plow of the Lord’s appointment without turning back. We do this in order to hear our Lord’s commendation: “well done, good and faithful servant.” Distractions are among us; they are part of the battle. Acknowledging their presence is not the same as embracing them. They can de-rail us, and we need to be aware of some of the distractions of our day.

“Churchmen” Pastor Jeff Niell
As Christians we are to be “churchmen”, men of the Church, members of Christ’s bride, in union with the Savior. Being called a churchman is a matter of our reputation; it is a strong compliment, and a high (and curious) commendation in a day when “church” and “men” are seemingly polar opposites. We are to be men of the Church and the Church should teach us what it means to be men.