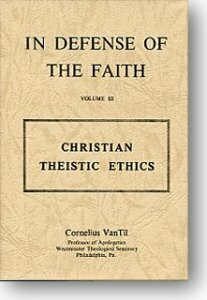 In Defense of the Faith, Vol. VI: Christian Theistic Ethics

SKU PA907
$14.95
148 page, softcover
In stock
1
Product Details
When Socrates met Euthyphro he wanted to know what holiness is in itself, regardless of what God may say about it. To find what is right and true, the soul must have conversation with itself. By looking within, you will know what is good. Richard Kroner speaks of the ethical principle of Socrates as that of a "new inwardness."


In modern times Immanuel Kant developed this principle of the inward self-sufficiency of man's moral consciousness with great ingenuity. Kant, as well as Socrates, is indifferent to what God may say about the nature of the good. But the seeming indifference of both Socrates and Kant to what God may say is, as a matter of fact, hostility to what God says and has said. Kant manifests this hostility in striking fashion when he "demythologizes" the content of the Christian Scriptures and reinterprets them so as to make them mean what the independent moral consciousness has already said.

This syllabus claims with the historic Reformed creeds that the good is good because God in Christ through the Scriptures, says it is good. Without the presupposition of the self-sufficient moral consciousness of the triune God revealed in Scripture, man's moral consciousness would operate in a vacuum.

To bring out this point Part I deals with Christian Ethical Principles. It seeks to show that it is the triune God of Scripture who sets before man his moral goal, who in his revelation gives him his moral standard, and by the gift of faith enables him to work toward his proper goal by way of following the instruction of his revelation.

To bring out this same point by way of contrast, Part II traces the development of apostate man's principle of "inwardness" or moral self-sufficiency in order to show that it has led and cannot but lead to moral chaos. The argument of the two parts constitutes what amounts to a plea to men who, today more obviously than before, spurn the revelation of God in the Christ of Scripture, and trust in the autonomy of the moral consciousness of man to see that in this case as well as in the whole field of knowledge, God has made foolish the wisdom of man, and has been pleased to save them that believe.