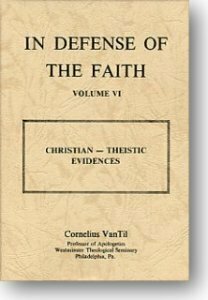 In Defense of the Faith, Vol. III: Christian Theistic Evidences

PA906
$14.95
251 page, softcover
In stock
1
Product Details
UPC: Cornelius Van Til
Brand: CMF
The present study contains two parts. The first part was used by the author for a number of years as a class syllabus on Christian Evidences. The main contention of this syllabus was to the effect that the traditional ButlerAnalogy type of argument for the factual truthfulness of Christianity is basically defective. Its basic defect is to be found in the fact that, with Arminian theology, it begins by assuming that the enemies of the gospel of Christ are right in holding that man is, or may be, self-explanatory, and that the facts of his environment are, or may be, purely chance-produced and directed.


A true method of Christian Evidences must start with the interpretation of man and his universe as given to him on the absolute authority of Christ speaking in Scripture in order then to show that unless this is done man abides under the wrath of God and his speech is meaningless.

The appendix contains a portion of a series of three lectures given at Calvin Theological Seminary in October 1968. It deals with essentially the same subject as the first part. Its argument is to the effect that the method of more recent non-Christian scientific methodology is bankrupt because it insists that man can know nothing of God and yet speaks in all its utterance about God. As a consequence recent scientists make an absolute separation between an abstract law of logic which is like a turnpike in the sky, and an infinite number of purely contingent facts, not one of which is distinguishable from another.

The Butler type of argument is again shown to be helpless. It cannot apply the message of Christ as the Way and the Truth to this situation. Only on the presupposition of the truth of the words of the self-attesting Christ as available in the Scriptures can man, with his scientific enterprise, be saved.