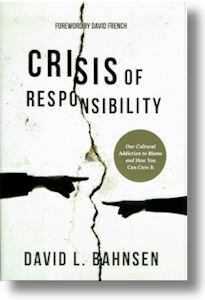 Crisis of Responsibility by David Bahnsen

Our Cultural Addition to Blame and How You Can Cure It

is the Managing Partner of The Bahnsen Group of HighTower Advisors, managing over $1 billion of capital. He is a frequent guest on Fox Business and CNBC, and is annually recognized as one of the top advisors in the country by Barron’s, Financial Times, Forbes, and others.

The left and right have gone to great lengths to blame the problems plaguing our society but neither Washington, D.C., Wall Street, Mexico, China, the Feds, nor the media are the cause of our problems—nor are they the cure.

Across the globe a “revolt” of sorts is taking place against elitism. No more will big government, big media, big banks, big bureaucracy, and big institutions hold the secret nuggets of truth and dictate our lives and fortunes. Financial markets, political punditry, and cultural leaders are all scrambling to react to the rise of the often disenfranchised.

But what happens after all the bogeymen have been vanquished? What if opposing the incompetence of the European Union, the biases of the American media, the corruption of crony capitalism. the arrogance of political power brokers, and allegedly unfair global trade deals is not enough?

The key to American prosperity in this new era of populism is for moral people to make responsibility matter again by renewing personal virtue and form lasting, mediating institutions that will trump the elitist bogeymen and scapegoats for generations to come.

If we fail as individual Americans to address this core crisis of responsibility, we have only ourselves to blame for what happens next.