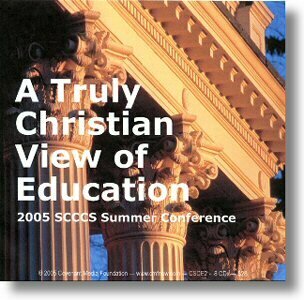 A Truly Christian View of Education

CSCE2-CD
$19.00
CSCE2 2005 SCCCS Summer Conference
In stock
1
Product Details
UPC: SCCCS
Brand: CMF
That Christian parent ought to raise their children in the nurture and admonition of the Lord is not a fact disputed by very many Christian people. However, defining what that means when applied to the education of our little ones is a subject of intense controversy. Being committed to a decidedly Christian worldview, the Southern California Center for Christian Studies proudly presents our 2005 summer conference, seeking to answer the question, Just what does it mean to give our children a truly Christian education?

We may preach with all the fervor of a reformer and yet succeed only in winning a straggler here and there, if we permit the whole collective thought of the nation or of the world to be controlled by ideas which, by the resistless force of logic, prevent Christianity from being regarded as anything more than a harmless delusion. Under such circumstances what God desires us to do is to destroy the obstacle at its root…. What is today a matter of academic speculation begins tomorrow to move armies and pull down empires.… A revival of the Christian religion will deliver mankind from its present bondage, and will bring liberty to mankind. Such a revival will not be the work of man, but the work of the Spirit of God. But one of the means which the Spirit will use is an awakening of the intellect. -J Gresham Machen

GARY DEMAR is a graduate of Western Michigan University (1973) and Reformed Theological Seminary (1979). He has lived in the Atlanta area since 1979 (West Cobb County). Gary and his wife are members of Midway Presbyterian Church (PCA) Gary is the author of more than twenty books covering a full range of topics including the three-volume God and Government series (1982-1986) and Surviving College Successfully (1988). Gary has been interviewed by Time magazine, CNN, MSNBC, and FOX (amongst others). He is president of American Vision, a Christian educational and communications organization whose purpose is to help Christians in their development of a comprehensive biblical worldview.

DR. JOHN KING is an instructor of Nuclear Engineering at Oregon State University (OSU). He holds a Ph.D. in Mechanical and Nuclear Engineering from OSU and an M.Div. from Westminster Theological Seminary in Escondido, CA. He is interested in the application of the Christian Faith to all areas of human thought and culture and has written a book discussing the implications of divine predestination for a Christian worldview. The book is entitled Predestination in Light of the Cross: A Critical Exposition of Luther's Theology.

ANDREW SANDLIN (B.A., M.A.) is founder and president of the Center for Cultural Leadership, an educational foundation dedicated to influencing Christians to be culturally influential (www.christianculture.com), and a teacher at Church of the King-Santa Cruz (CREC). He has served in numerous church capacities and speaks regularly at churches and at various conferences. He has written several books and monographs and thousands of essays and articles. His latest book is New Flesh, New Earth: The Full Power of the Resurrection. He is married and has five adult children.

BRIAN GODAWA is the screenwriter for the award-winning feature film, To End All Wars, starring Kiefer Sutherland and Robert Carlyle. Most recently, he adapted to film the best-selling novel The Visitation by author Frank Peretti. Mr. Godawa's articles on movies and philosophy have been published in magazines around the world. He has traveled around the globe teaching on movies and culture to colleges, churches and community groups. His book, Hollywood Worldviews: Watching Films with Wisdom and Discernment (InterVarsity Press) is in its seventh printing. He is a member of Pacific Crossroads Church (PCA).

DAVID HAGOPIAN earned a B.A. in History with a minor in Classical Greek from the University of California, Irvine (phi beta kappa, magna cum laude), and a Juris Doctorate from the USC. While an undergraduate, he earned multiple awards and national rankings in intercollegiate speech and debate competition and also taught logic and rhetoric with the Pegasus Program for Gifted Students. He currently is ordained as a Teaching Elder in the, and helped to found, Ancient Hope Reformed Church (CREC) in Mission Viejo, CA. He is a partner with the law firm of Holdsworth & Hagopian in Costa Mesa. California, co-owns and operates the marketing and advertising consulting firm of Precept Marketing Group, Inc., and is the President of Crux Press, a Reformed publisher of "books that matter." He has been married to his beautiful wife, Jamie, for 19 years and has four children on this side of glory: Brandon. Kirstin, Anallyce, and Alden all of whom have been classically homsechooled.

JAMES NICKEL holds degrees in mathematics (B.A.), theology (B.Th, and B Miss.), and education (M.A.). He is also a candidate for the M.S. degree (Master of Science in Mathematics with a Teaching Option). He has been involved in the Christian school movement since 1978 serving as a teacher, home school parent, researcher lecturer, and writer. He is the author of Mathematics: Is God Silent and two forthcoming textbooks. Mathematics: Building on Foundations and Mathematics: The Language of Science. He is currently the Dean of the School of Mathematics of Christian Heritage Academy International, a proposed biblical Christian distance learning school developed in association with Patria Institute, LLC in Leavenworth, Washington.