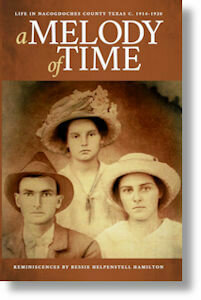 A Melody of Time

A Melody of Time

I have had an interest in Nacogdoches County history for a number of years. My own family settled in East Texas in 1839 and my great, great grandfather was a doctor in Shelby and Nacogdoches Counties from the late 1800s until his death in 1926. My grandparents were ten and twelve years older than the author of this book, and my father remembers visiting their rural farm when he was a boy. I moved to Nacogdoches in the summer of 2000 and have enjoyed visiting and researching our local history.

A friend of mine, named Alan Hamilton, the grandson of Bessie Helpenstell Hamilton, loaned me his surviving copy of a previously published version of his grandmother’s book, A Melody of Time: Life in Nacogdoches County, Texas, c. 1914—1920. Her reminiscences of her family life when she was a young girl were fascinating to me, giving a snapshot of life a hundred years ago just down the road. In 1914, the population of Nacogdoches County was around 28,000 people, and many families operated subsistence farms or worked in the timber industry, as did Bessie’s family. With no electricity or running water, wives cooked on wood stoves, water was hauled from the well, and children did their homework by the dim light of coal-oil lamps. Clothes were boiled and washed by hand, fields were plowed with mules, and timber was cut with hand saws and axes. A very few “horseless carriages” were around, but they were rare. Even radios were all but unknown. Medical care was very limited and sickness and death were never far away.

A Melody of Time will take you to a place that is not so distant in time but will seem ancient in in other ways. Life was hard, and thus family and community were crucial to survival. They could not have imagined our lives in the twenty-first century, but thanks to books like this, we can be transported to hear and see those who have gone before us.

We are excited to present this new publication of A Melody of Time.

We like to remember the new century as years of childhood happiness, remembering its springtime as the oak tree’s green tassels, and snowy dogwood that embroidered the woodland, redbud a ribbon at the edge of the pasture, great black and gold butterflies, the orchard a pink cloud, yellow ducklings in the green grass under the bouquet of pear blossoms. We like to remember the wind as soft and sweetly laden with perfume from the south, and the children as happy, with no pain, no problems, no illness, playing about the flowery yard or gathering wild flowers for their mother’s bouquets.

We don’t like to remember evil March winds on the green tassels, or dropping petals from the dogwood, the death of butterflies, the summer heat, the peach trees bereft alike of bloom and fruit to await the preying winds and snows of winter. It is with sorrow we recall the babies choking to death with diphtheria because there was no vaccine, babies dying as our little Ruth had because there were no antibiotics to fight pneumonia, babies dying of dysentery, because there was no way of fighting it, and doctors who knew little more to do than the mothers and sat by while the little ones drew their last feeble breaths. The cemeteries are laced with rows of little graves, sometimes two, three or even four in the same family. As the century grew, the little headstones became moss covered, and there were now new little headstones in rows, sons and daughters of John and Mary Doe.